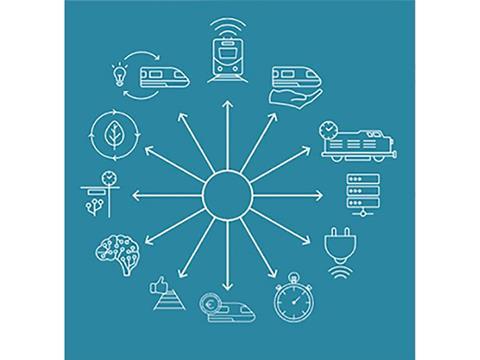 EUROPE: The European Commission has invited expressions of interest in becoming founding members of a new European Partnership on Rail Research & Innovation, which is being put forward as a successor to the current Shift2Rail Joint Undertaking.

In line with the European Green Deal strategy announced in December 2019, the Commission is looking to achieve substantial increase in rail’s share of the freight market by 2030, while bolstering Europe’s ‘technological global’ leadership in the rail sector.

The Transforming Europe’s Rail System European Partnership would be jointly managed by the Directorates-General for Mobility & Transport and Research & Innovation, within the Horizon Europe research programme.

The seven-year programme is intended to ‘focus on accelerating, with an integrated system approach, research, development and demonstrations of innovative technologies and operational solutions to make rail more attractive, enabled by digitalisation and automation.’

According to DG Move Director-General Henrik Hololei, the future partnership would build on a long-term commitment ‘to deliver solutions ready to enter industrialisation, operations and deployment’.

Recognising the need to involve all stakeholders, including infrastructure managers and train operators as well as academia and the supply sector, the Commission is aiming to select around 20 partners to provide a ‘balanced’ representation from all parts of the rail sector.

Both private and public entities are invited to submit expressions of interest by October 1, with the preferred partners to be identified by the end of the month. The final membership agreements would be negotiated by the Executive Director of the new Joint Undertaking; the Commission says these will be ‘designed to ensure the necessary continuity of research and innovation with Shift2Rail while looking for new models for implementation’.

The partners will then work with the Commission to identify the research priorities and call topics, which will be set out in a master plan. This will also build on the priorities identified in the Strategic Research & Innovation Agenda developed by the European Railway Research Advisory Council.

As with Shift2Rail, the Partnership is to be established as a Joint Undertaking, and the Commission is planning to bring forward a draft regulation setting up a number of JUs within the Horizon Europe programme. This will also determine the final scope, objectives and budget for the partnership.

A key criterion establishing a European Partnership is the need to demonstrate that it will be ‘more effective’ than traditional research calls. The Commission notes that the future partnership will ‘require collective commitment to a Common Vision’, and an agreement to share the costs. Partners will be expected to commit at least €30m, of which 5% would be a contribution to the JU’s running costs.

However, the Partnership will be able to explore funding opportunities under a variety of European programmes, such as the Connecting Europe Facility, Digital Europe Plan, the European Regional Development Fund and the Cohesion Fund. It will also be expected to develop ‘systemic synergies’ with existing funding mechanisms.