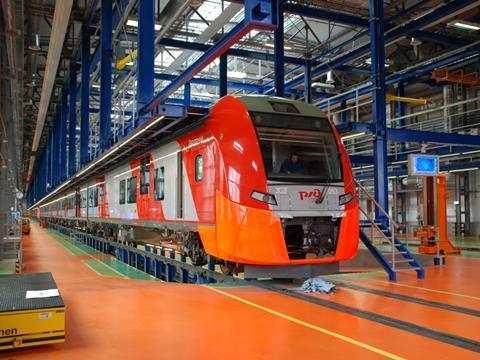 RUSSIA: Plans to increase the use of electric traction were announced by Russian Railways on May 14, with the national operator saying this would offer environmental benefits compared to the use of diesel or road and air transport.

RZD said the electrification of its most heavily used lines and the withdrawal of diesel locomotives was a strategic priority. More than half of the 85 500 km network is currently electrified, and more than 85% of all rail passenger-journeys in the country are on electrified routes.

There is growing demand for travel between urban centres and surrounding regions, and RZD said it was electrifying routes and ordering rolling stock which offers ‘the best combination of speed and price‘ to attract passengers from cars and buses.

RZD plans to purchase almost 1 000 electric locomotives over the next three years at a cost of €2bn. It is also to increase its fleet of Sinara/Siemens Lastochka electric multiple-units from 183 to 270 by 2021, using the 1 520 mm gauge version of the Desiro family on daytime inter-city routes as well as suburban lines.