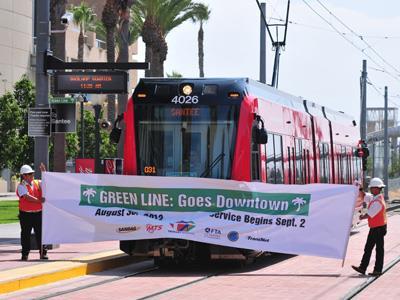 USA: The half-way point in a $720m modernisation of the San Diego Trolley light rail network was marked by the introduction of a revised network on September 2.

Green Line services have been extended along existing tracks through the city centre, passing the Convention Center and Petco Park to terminate at 12th & Imperial Transit Center.

The renewal programme began in late 2010 and is scheduled to be completed in 2015. It includes the replacement of track, electrification and signalling equipment dating back to the opening of the San Diego Trolley in 1981, while stops are getting new shelters, CCTV, passenger information systems and lighting.

Siemens is supplying 65 low-floor S70 Avanto LRVs, which along with platform height adjustments at 35 stops will provide level boarding. As well as improving access for all users, this is expected to improve service performance by eliminating the need for wheelchair lifts. New vehicles are already in use on the Green Line, and are due to enter service on the Orange Line in spring 2013 and on the Blue Line in summer 2014.

'With the Green Line coming downtown, people all over San Diego can now reach the downtown area more conveniently', said Metropolitan Transit System Chair Harry Mathis at the inauguration ceremony on August 30. 'This event also marks about the half-way point in a major reinvestment of our trolley infrastructure, which will bring low-floor cars and modern stations to our entire trolley network.'