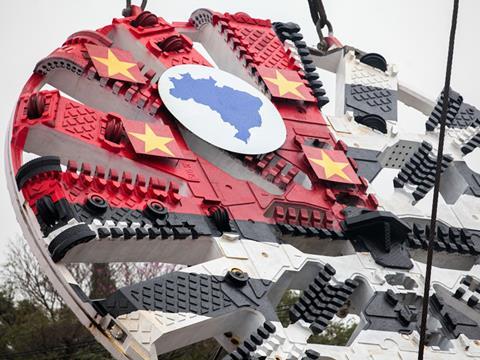 BRAZIL: The cutting head for the 1 500 tonne TBM that is to be deployed on the 11⋅5 km extension of São Paulo metro Line 5 from Largo Treze to Chácara Klabin was lowered into place on July 1, in the presence of state governor Geraldo Alckmin.

‘We will move the second TBM into position in August and the third in September’, said Alckmin. ‘There will be three TBMs in operation simultaneously to take the works forward’.

The first TBM was previously used during the construction of Line 4 in São Paulo, and has been modified to increase the diameter of the bore from 9⋅41 m to 10⋅58 m. On its 4⋅8 km drive on Line 5 between the access shafts at Bandeirantes and Dionísio da Costa, it is expected to cover between 12 m and 15 m a day.

Serving 11 stations, the Line 5 extension is expected to cost a total of R$7⋅5bn.