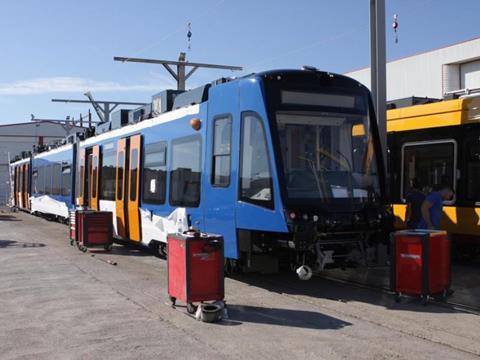 UK: The first of seven vehicles ordered in 2013 for the Sheffield – Rotherham tram-train pilot project is now nearing completion at Vossloh España’s plant near Valencia, and is due to arrive in the UK in November.

South Yorkshire Passenger Transport Executive says the Vossloh vehicles will initially be used to increase peak capacity on the existing Sheffield Supertram network. Tram-train services between Sheffield and Rotherham using a new 400 m connection between Supertram and a Network Rail freight line at Meadowhall are now expected to start in early 2017.

The freight line is to be electrified at the tramway’s 750 V DC, and the vehicles’ ABB electrical equipment will also be suitable for future 25 kV 50 Hz main line power supplies.

The £58m tram-train pilot project is being led by South Yorkshire Passenger Transport Executive in partnership with the Department for Transport, Network Rail, tram operator Stagecoach Supertram and franchised train operator Northern Rail which was responsible for selecting Vossloh to supply the vehicles.