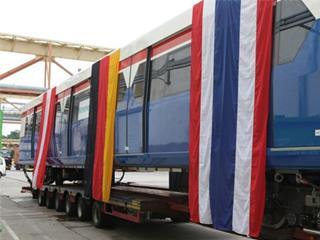 The first batch of four cars is scheduled to arrive at Laem Chabang Port from Germany on August 20. Following testing and commissioning, the lengthened trains are expected to enter passenger service on the Sukhumvit Line in October.

Following the delivery of 12 four-car trains from CNR Changchung Railway Vehicles in 2010 to work the extended Silom Line, BTS has deployed all of its original Siemens trains on the Sukhumvit Line, which was itself extended by 5·3 km from On Nut to Bearing in August 2011. Work began earlier this year on a further 12·6 km extension with seven stations from Bearing to Samut Prakan, which is due to be completed in 2015.