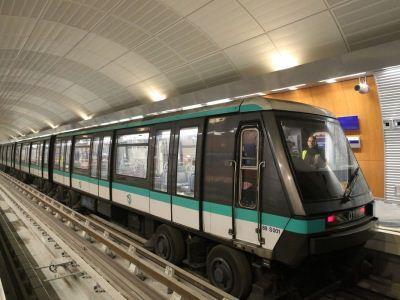 FRANCE: RATP announced on January 7 that it had selected Siemens for a €70m contract to automate the 12·1 km Paris metro Line 4 to enable driverless operation.

The work is scheduled for completion in 2022. Siemens is to install its Trainguard MT signalling and will equip the operations control centre. Platform edge gates will also be installed at all 27 stations. According to Siemens, full automation of the line would increase capacity by up to 20% by enabling headways of 85 sec. It is also expected to reduce energy consumption by up to 15%.

Line 4 is operated using rubber-tyred trainsets and currently carries more than 700 000 passengers a day. A 1·7 km southern extension from Montrouge to Bagneux is currently under construction. RATP proposed the conversion of Line 4 to driverless operation in June 2013, and this was approved by Ile-de-France transport authority STIF shortly afterwards.

Line 4 would be the second metro line in Paris to be converted to driverless operation, following Line 1 where conversion was completed in December 2012. Siemens also provided automation equipment for that line, as well as for Line 14 which opened as a driverless line in 1998.