Does arrival of winter have to paralyze the railways? 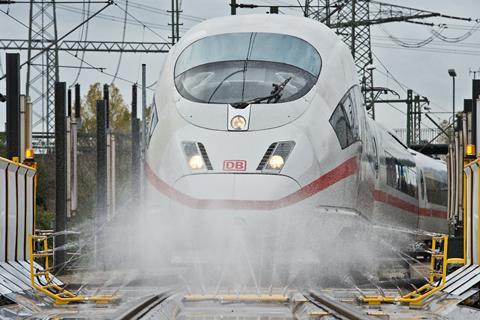 This year’s winter has proved that despite the investments in infrastructure and new rolling stock deliveries, infrastructure managers and operators still fail to cope with the difficulties associated with frost and numerous snowfalls. Rolling stock breakdowns and damage of the infrastructure cause train delays and cancellations.

Thanks to preventive approach, ice build ups on bogies and selected sections of the underframe of the train can be prevented. Anti-Icing requires lowest total possible energy balance compared to all other forms of de-icing process. Less energy is needed to anti-ice prior to train departure rather than to de-ice the rolling stock using hot air, water or steam. 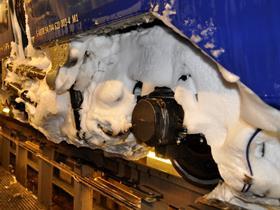 The ice build-ups and remaining snow may cause problems with various systems like brakes, doors, couplers or bogies. The only effective method of ant-icing is covering specific parts of the rolling stock with special fluid that remains on the surface and creates a protection layer.

Train operators who use the anti-icing system confirm reduction of time and maintainence costs during winter seasons. Infrastructure managers struggle with less ice build-ups falling from the rolling stock causing damages of switches and signalling devices.

The largest European passenger and cargo carriers use preventive approach, since anti-icing concept is already tested and approved by the rolling stock producers. Its roots are in the aviation industry whereit has been used for over 30 years. 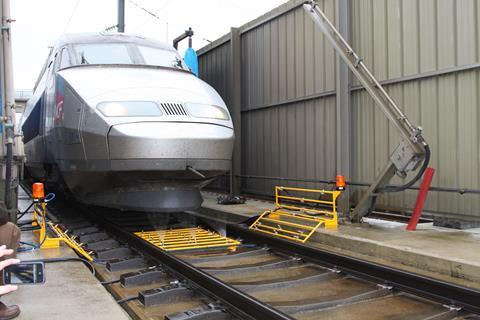 A system appreciated all over the world

Nordic Anti-icing system is a unique and automated system that efficently reduces build-ups approved by the main train manufacturers worldwide. A heated, anti-icing fluid is sparayed under low pressure onto bogies and other selected parts. The liquid stays on the sprayed surface as protective layer preventing the snow from sticking. The excess fluid and meltwater are collected on trays laid down on the rails. After purification in an automatic and environmentally friendly process, the fluid is reused in the next treatment. Each train type has a pre-configured spraying program. During anti-icing process, the rolling stocks pass through system at low, constant speed. Various sensors detect the position and allow the proces to activate and deactivate autonomously.

All fluids are biodegradable, non toxic and environmentally friendly. Most of major rolling stock manufactures like Alstom, Siemens, Bombardier and Stadler had already treated part of fleet in order to avoid winter problems.

Over the past years, Nordic engineers have developed more than 10 types of fluids together with strategic partner Kilfrost, original pioneers of de-icing and anti-icing solutions for the aviation sector. 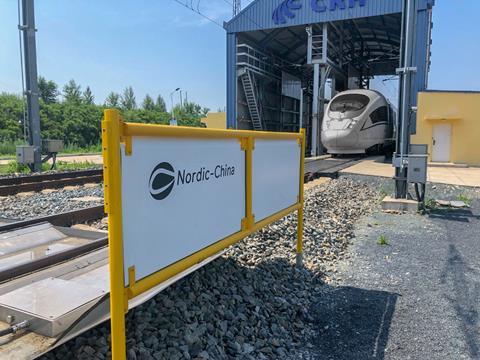 Since 2019, Nordic solution has been successfully operating in Asia, where the first dual system for Chinese Railways was put into service. After numerous tests, it was decided to order further systems which will be a strategic maintenance element of rolling stock and railways being prepared specifically for the Winter Olympics in Beijing in 2022. In addition, the system is being tested in South Korea, which has high-speed rail services. Anti-icing installations also operate in Canada and Russia (Saint Petersburg – Moscow line). 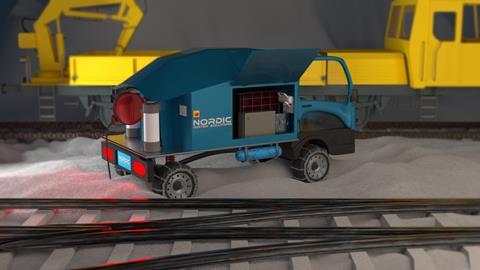 Anti-icing system for other elements of infrastructure

The Scandinavian company is continuously improving the systems, adapting them to fast developing railway market that requires higher speeds and longer lasting effects of anti-icing fluid. All of research activities are conducted with the highest care of environmental, health and safety issues.

Since its beginning, Nordic Winter Solutions has been focused on solving the problems that railways cope with during temperatures below zero. Broad experience in winter problems and with a range of anti-icing fluids allows to adapt the technology to other elements of infrastructure. The company puts substantial effort into developing reliable solutions protecting the catenary and turnouts. The forming ice interferes with infrastructure, paralyzing the traffic and causing downtimes. Nordic presented the first mobile unit to be mounted on a vehicle with capabilities to reach remote locations. It is composed of tanks and equipement capable of preparing the fluid in preset parameters. The hand lances allow spraying directly onto selected elements.