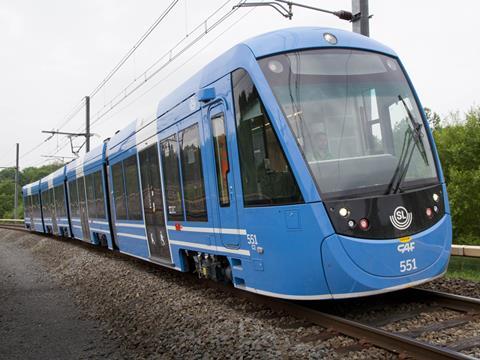 SWEDEN: The first of seven Urbos Axle low-floor light rail vehicles which CAF is supplying to Stockholm's SL is now being tested at the Petite-Forêt test centre near Valenciennes in France.

Designated A36 by SL, the 1 435 mm gauge cars are similar to 15 A35 cars which CAF has supplied for the northern extension of Stockholm’s Tväbanan orbital light rail line, but have an extra intermediate section to increase capacity. The A36 cars are 40·6 m long and 2 650 mm wide, with 102 seats and space for 157 standing passenger at 4/m². The four-module cars are carried on five bogies, of which four are powered by eight ABB traction motors of 65 kW. This will give them a maximum speed of 90 km/h.

Both types of car have aluminium bodysides and roof, with a steel underframe and GRP cab ends enclosing a crash-resistant steel frame. The articulation is designed to enable them to operate around curves down to 17 m radius.

The A36 cars will operate on the 9·1 km Södra Lidingöbanan to the east of the capital, which runs from the Red Line metro terminus at Ropsten to Gåshaga on the island of Lidingö.

This line was previously operated by a fleet of 21 much-rebuilt A30 and B30 trams dating from 1944, which ran as two-car and three-car sets. The line was closed in July 2013 for complete reconstruction, including a new depot, and is expected to reopen in March 2015.