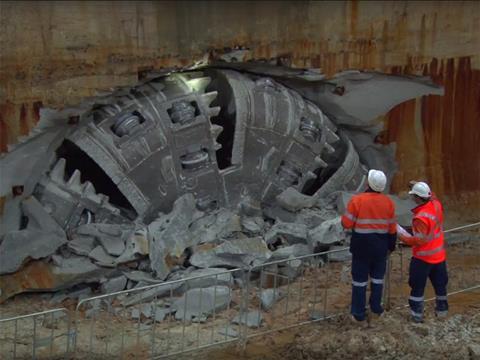 AUSTRALIA: Tunnel boring machines typically arrive ‘face first’ at a breakthrough sites, but TBMs Maria and Isabelle which are being used on the Sydney Metro Northwest project passed through a future ventilation and emergency access shaft at Cheltenham with the top 3 m of their cutter heads above ground.

NFM Technologies has supplied four 120 m long, 6·99 m diameter hard rock TBMs to the consortium of Thiess, John Holland and Dragados which is building the 15·5 km twin-bore tunnels under a A$1·15bn contract awarded in June 2013.

Tunnelling began in September 2014, and more than 20 km is now complete. Two TBMs were launched from the site of the future Bella Vista station and are boring 9 km to the site of Cherrybrook station, from where the other pair are boring 6 km to Epping. The tunnels are an average of 29 m deep, with the lowest point at 58 m.

The A$8·3bn Sydney Metro Northwest (formerly known as the North West Rail Link) is scheduled to open in 2019 as the first phase 1 of the Sydney Metro project. The automated line will run for 23 km from Chatswood to Epping on a converted heavy rail alignment, continuing through the 15 ·5 km tunnel to emerge at Bella Vista onto an 4 km elevated section, terminating at Cudgegong Road in Rouse Hill and the depot beyond.