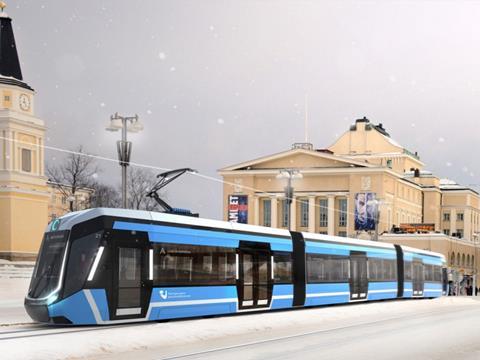 FINLAND: The city of Tampere is holding a Tramway Industry Day on November 17 to inform potential suppliers about a planned two-route standard gauge tram network. The city expects to decide on the procurement model by the end of 2014, with contractors selected next year.

Work on the first section from Hervanta to the city centre could start in 2016, with opening in 2018-19. This would also include a depot in Hervanta, as well as an automatic tram control and information system.

Subsequent phases would build a branch east to the central hospital for €20m, and extend the main route to Lentävänniemi in the northwest of the city at a cost of €60m. All three phases should be completed by 2022.

The 23·5 km route would be double-track throughout, with 17·8 km using a segregated alignment, a further 1·4 km in shared bus lanes and the remaining 4·3 km in mixed traffic. There are proposals to increase the proportion running on segregated right-of-way. Some outer sections would allow running at up to 70 km/h.

The government is expected to finance 30% of total infrastructure costs of €250m. Rolling stock is budgeted at a further €83m. The fleet would comprise 26 bidirectional trams with capacity for around 210 passengers each. Of these, 10 would be required for the first phase and 23 would provide a service with 7½ min headways once the full route is operational. The trams would be winterised for local weather conditions.

The 33 stops would have platforms that can accommodate 47 m long vehicles, even though the cars are envisaged around 30 m long and 2 650 mm wide.

The city is being assisted by the following advisers: