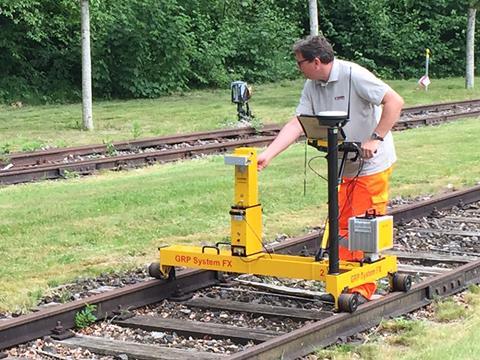 Using a hand-propelled trolley as a base to carry a variety of measuring tools and georeferencing devices, Amberg is seeking to ensure a high degree of modularity and ease of use for both surveyors and maintenance staff. The focus is to best fit into the workflow of its customers and increase both the accuracy and speed of surveying.

Delivering a series of demonstration surveys at Speicherstadt in the suburbs of Münster on May 30, Amberg highlighted increasing demand from main line and urban rail asset owners for tools that can survey the railway alignment and surrounding structures with greater precision. The company claims that its tools can complete surveying jobs in half the time of competing products on the market at present. This is a particular asset for surveys undertaken before and after tamping, where infrastructure managers face pressure to use shorter track possession windows.

Amberg is introducing a number of product developments in 2017, focusing on the trolley-mounted Inertial Measurement System introduced in 2015 for surveying and tamping applications. This can be operated by one person compared to two or three for conventional systems which involve either wayside tripods or a twin trolley approach, explained Head of Rail Products Marius Schäuble.

In 2016, the company launched its 'start from scratch' IMS Survey product, capable of producing an 'as built' survey of a railway without relying on any track records or control points. At IAF, Amberg launched the IMS GNSS, which enables users to embed surveying results in an absolute co-ordinate format which is compatible with BIM and CAD applications.

The company reported that the trolley can handle walking surveys at 4 km/h, a significant increase on previous designs.

Amberg also showcased its infrastructure measurement product, where a laser scanner is mounted on the IMS base system. This IMS 5000 platform acquires comprehensive object data around the track for clearance analysis or creation of 3D point clouds, Schäuble explained.