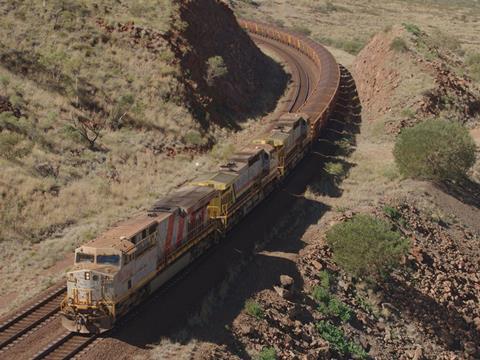 AUSTRALIA: Rio Tinto completed its first iron ore delivery using a driverless train on July 10. The Office of the National Rail Safety Regulator had granted approval on May 16, and full commercial operation is planned for late 2018.

The fully-loaded autonomous train with three locomotives carried 28 000 tonnes of ore over the 280 km between the Tom Price mine and the port of Cape Lambert in Western Australia, monitored from Rio Tinto’s Operations Centre more than 1 500 km away in Perth.

Each locomotive has been equipped with an onboard module which sends automatic reports on its position, speed and direction of travel to the control centre. The locomotives and all public crossings are also fitted with cameras allowing constant monitoring from the control centre.

Deployment of the ATO over ETCS Level 2 technology to support Grade of Automation 4 (unattended) operation is the result of six years of development by Rio Tinto and technology supplier Ansaldo STS under the mining company’s A$940m AutoHaul project.

Automation is being introduced on much of the 1 700 track-km network with 200 locomotives which Rio Tinto uses to transport ore from 16 mines to four port terminals in the remote Pilbara region. The average round trip is about 800 km and takes around 40 h, including loading and unloading.

Ansaldo STS President for Freight, Michele Fracchiolla, said ‘one only need to refer to the degree of change that the introduction of driverless metros has had on mass transit operations in the passenger sector to gain insight into the potential impact that autonomous freight rail management solutions may have in the heavy freight and resources sector.’