Hydrogen fuel cell train to be developed with EU funding 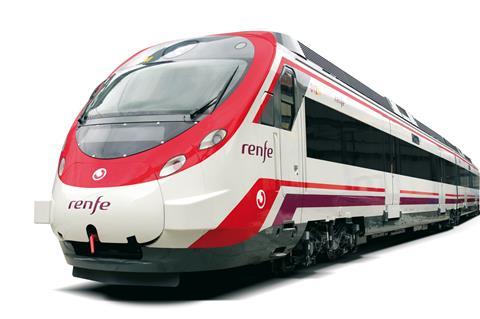 EUROPE: The FCH2RAIL consortium’s €14m project to design, develop and test a prototype hydrogen fuelled train has been awarded a €10m grant from the European Commission’s Fuel Cells & Hydrogen Joint Undertaking as part of the Horizon 2020 Programme

FCH2RAIL aims to produce a zero-emission train offering an operating performance which is competitive with existing diesel trains, using technology which could be applied to both new and refurbished vehicles. The overall budget is €14m, of which 70% would come from EU funds, and the remainder from the project partners.

The prototype will be produced by modifying a CAF Civia Class 463 three-car EMU, a type which is found on many Spanish commuter networks. This will be equipped with a hydrogen fuel cell system and lithium-titanate batteries, giving the ability to operate through from electrified routes onto non-electrified lines.

Testing and authorisation is to take place in Spain, Portugal and a third country still to be determined.

The project will explore the use of waste heat from fuel cells to improve energy efficiency. The work programme also includes the drafting of new and updated European technical standards to ensure the interoperability of future hydrogen trains.