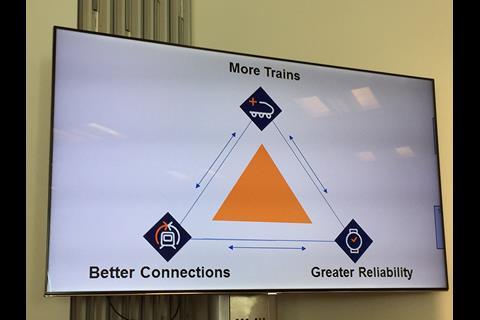 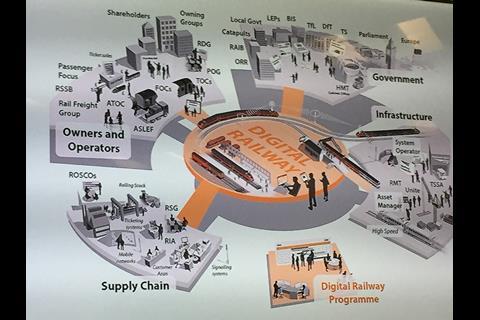 NR’s £300m programme to move from the ‘paper age to the digital age’ has so far saved £100m through better management of assets, he said, while these assets are now more reliable than ever. The Digital Railway programme is now looking at the ‘bigger picture’, and how NR’s experience can benefit the rail industry as a whole.

Bossert said there are locations where ‘we just need more trains’, such as on the route into London’s Waterloo station where services through Surbiton are at 170% capacity in the peak. Here, there is ‘no choice’ but to find a way to operate more trains on the network, and it is hoped that a combination of cab signalling and traffic management systems could provide 11 extra peak train paths an hour. This would avoid the need for the costly and disruptive construction of a fifth track through 10 km of London suburbs, or the ‘eye-watering’ expense of rebuilding the route to accommodate double-deck rolling stock and its longer station dwell times.

The need for better connectivity has also been identified, as passengers do not only want to commute into major termini. Capacity constraints mean some trains are currently unable to call at interchanges such as Clapham Junction, but NR and operators envisage that analysis of travel data, including non-rail users, could allow service patterns to be optimised to enable better connectivity.

Digital Railway means ‘we can put more trains on the rails’, but Bossert suggested that there are some lines where the need is for better reliability, greater connectivity and lower costs, rather than more services.

In Wales, for example, NR’s focus is on lower costs and greater reliability. In Scotland there is a need to provide extra capacity around Edinburgh and Glasgow, and to lower costs elsewhere. In the north of England, better connectivity from towns and villages to centres of employment is seen as essential to supporting the government’s Northern Powerhouse initiative to rebalance the economy away from London and southeast England, while in the Midlands as well as the north there is a need is for more stops, perhaps including new stations to reflect changing demand, and for more ways to reach more destinations.

Freight demands are also changing, with the decline of coal and rise of intermodal traffic. Only 25% of containers arriving in the UK are currently moved by rail, offering a potential opportunity for freight operators, but demand occurs in spikes when a large ship arrives. This can be difficult for operators to handle, in contrast to the regular train paths allocated to steady flows of coal to power stations.