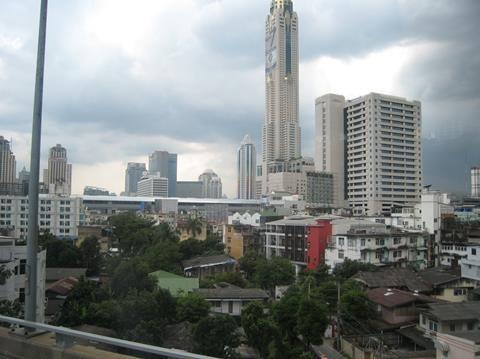 THAILAND: Test running has commenced over the first section of the Red Line suburban railway in Bangkok, ahead of a planned launch of revenue services by the end of the year.

The 15·3 km starter section links Taling Chan with Bang Sue on a new alignment that largely follows existing lines. Like most of State Railway of Thailand’s main line network, the Red Line is built to metre gauge, with passive provision for electrification at a later date subject to funding availability.

The Red Line will be operated by SRT as a DMU shuttle service initially; interchange with MRTA’s Blue metro line will be available at Bang Sue. A second phase of the project would see a new line built north from Bang Sue to Rangsit for use both by commuter and long-distance services. It is envisaged that Red Line services would also continue south along a partly-elevated alignment from Bang Sue through the city centre to Makkasan.

Civil works have been undertaken by the Unique-Chun Wo joint venture of Unique Engineering & Construction and Chun Wo Development Holdings of Hong Kong under an 8·7bn baht contract awarded in December 2008.