JAPAN: Ceremonies were held at Shinjuku-3chome station on June 13 to mark the inauguration of Tokyo Metro Line 13. 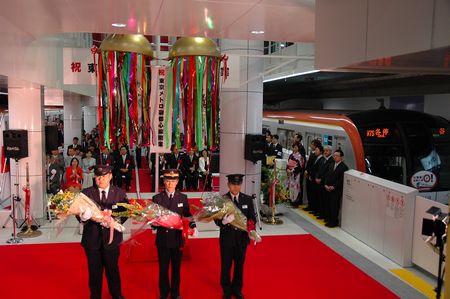 Now officially known as the Fukutoshin Line, the 8·9 km north-south route connects the districts of Ikebukuro, Shinjuku and Shibuya on the western side of the Japanese capital. There are six stations, providing interchange with other metro and suburban lines. To permit through running, the line has been built to 1 067 mm gauge and electrified at 1·5 kV DC.

The new tunnels connect end-on at Ikebukuro with the 3·2 km Yurakucho New Line running northwest from Ikebukuro to Kotake-mukaihara, which has been incorporated into the Fukutoshin Line. This line has already been carrying through trains from Tobu Railway's Tojo Main Line at Wakoshi and Seibu's Yurakucho Line at Narima, and these services will be extended through to Shibuya.

Revenue operation is scheduled to start on June 14. As well as the through trains operated by the private railway, Tokyo Metro will run a proportion of the service using its fleet of Series 10 000 trainsets, which were initially introduced on the Yurakucho Line. These aluminium-bodied 10-car sets are being supplied by Hitachi, and the first entered service in 2006. Each set has five powered cars and the trains can operate at up to 100 km/h in service

Work is still underway on a short southern extension of the Fukutoshin Line beyond Shibuya to Naka-Meguro, which is expected to open in 2012. This will provide a connection with Tokyu Railway's Toyoko Line, permitting through services to reach the centre of Yokohama via that city's Minato-Mirai Line.