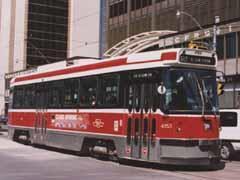 CANADA: Toronto Transit Commission launched a tender on September 15 for project management and consultancy services to support its ambitious Transit City light rail expansion programme. Estimated value of the contract, which will last about 10 years, is C$375m.

On August 27 TTC re-opened the procurement process for 204 low-floor trams at an estimated cost of C$1·25bn. Its initial attempt had attracted only two bids, both of which were deemed non-compliant (RG 8.08 p489).

A multi-phase bidding process will now be used, with Alstom, Bombardier and Siemens invited to participate. Technical requirements remain unchanged, and each company has said it could build a tram that meets the requirements. However, Bombardier responded that it would not be making a new proposal.

Skoda and Inekon had signed a Memorandum of Understanding on August 22 to submit a joint offer, but they are reported to have been eliminated from the bidding process.

The Canadian government on September 5 formally committed its C$622m share of the funding for the 8·7 km Spadina subway extension from Downsview to York University and Vaughan. York Region, the city of Toronto and the Province of Ontario had already pledged their contributions; the municipal, provincial and federal governments will each pay a third. TTC hopes to have the new segment open by 2015.