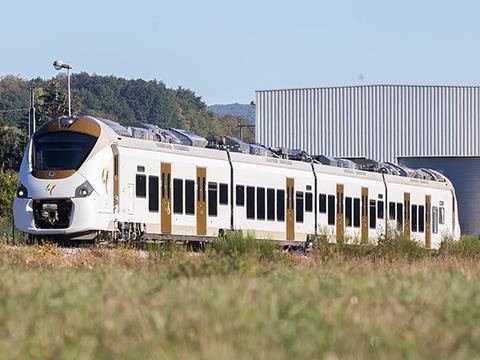 Similar to units previously supplied to France and Algeria, the 160 km/h four-car trainsets will be 72 m long with a capacity of 531 passengers in two classes.

Alstom’s Reichshoffen site in France is leading production of the trainsets, with Saint-Ouen undertaking design work, Le Creusot supplying the bogies, Ornans the motors and alternators, Tarbes the traction system and Villeurbanne the on-board IT and passenger information systems.

The first trainset is scheduled to sail from the port of Le Havre on the ship Grande Angola, which is expected to arrive at the port of Dakar on November 12. The car bodies and bogies will be reunited at Colobane depot, 3 km from Dakar, ready for static and dynamic testing.

‘The departure of the Coradia trains for Dakar is the crowning achievement of the tests conducted at Reichshoffen’, said Raphael Bernardelli, Alstom MD North & Central Africa, on October 22. ‘We are proud to contribute to this important mobility project that will place Dakar among the first African cities to acquire such technology.’