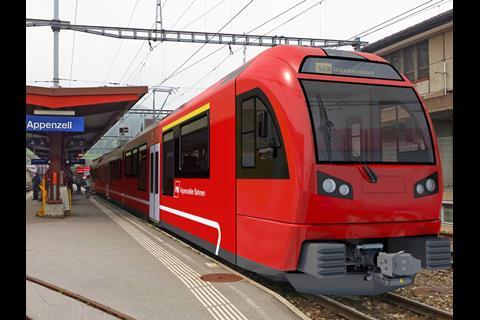 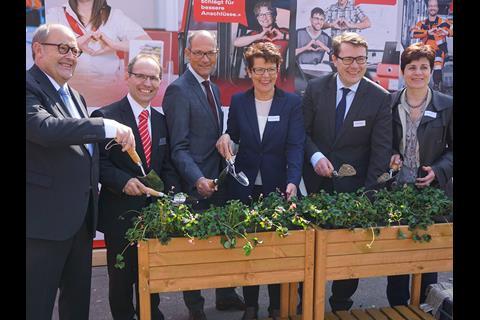 SWITZERLAND: Appenzeller Bahnen announced a SFr36m order for four Stadler Rail electric multiple-units on April 7, three days after a groundbreaking ceremony for the St Gallen – Riethüsli diversion which is being built as part of the St Gallen Durchmesserlinie project to enable through running between its Trogen and Appenzell routes.

The 1·5 kV DC metre-gauge EMUs are to enter service in mid-2018 to replace the existing units used on the Gossau – Appenzell – Wasserauen route. There is an option for a fifth unit.

They will be similar to EMUs which were previously ordered for the Nyon–St-Cergue–Morez and Transports Publics Fribourgeois lines in western Switzerland. The three-car units will be 58·8 m long and 2 650 mm wide, with 161 standard and 15 first class seats, space for 123 standing passengers, and a multi-purpose area for bicycles, prams and luggage. They will have a maximum speed of 80 km/h, air-conditioning and step-free access including an accessible toilet.

Meanwhile, a ceremony on April 4 officially launched construction of the St Gallen – Riethüsli diversion including the 705 m Ruckhalde tunnel which will replace a steeply-graded section line which currently uses the Riggenbach-Klose rack system. Opening is scheduled for October 2018.

The St Gallen Durchmesserlinie project will allow AB to operate a train every 15 min between Trogen, St Gallen and Applenzell. The infrastructure works are being funded by the cantons of St Gallen (SFr16m), Appenzell Ausserrhoden (SFr26m) and Appenzell Innerrhoden (SFr7m), with a further SFr41m from the federal government which gave the go-ahead in November 2015.

The narrow gauge platforms at St Gallen station are being rebuilt, and the project also requires the lengthening of two passing loops, the provision of a passing loop and stop at St Gallen goods yard, and increasing the voltage on the 9·8 km Trogenerbahn from 1·0 kV to 1·5 kV DC.