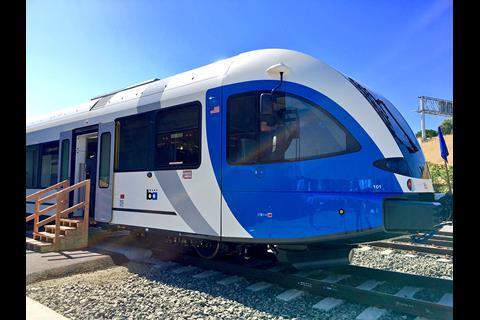 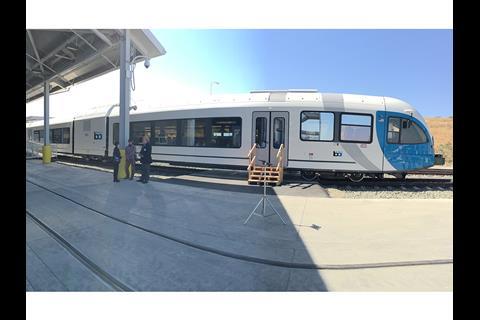 The eBART project was approved in 2007 as a quicker and more affordable alternative to extending the BART metro network into eastern Contra Costa County. It involves the construction of 16 km of dedicated 1 435 mm gauge line from BART’s Pittsburg/Bay Point terminus to new stations at Pittsburg and Antioch, running east along the median of Highway 4 which is being widened as part of a project with an overall value of around $1bn. A groundbreaking was held in October 2010, and BART says the $525m cost of the rail element of the project including standard gauge DMUs has been 60% cheaper than building an electrified line to the BART network’s 1 676 mm gauge.

The $58m order for the DMUs was placed with sole bidder Stadler in April 2014. They are based on units previously supplied to NJ Transit, Capital Metro I Austin and Denton County Transportation Authority in northern Dallas. They meet EPA Tier 4 emissions regulations, and have multilingual information displays and automated announcements.

All eight DMUs are due to be delivered by December 2016, ready for a year of state-mandated testing ahead of the launch of passenger services in winter 2017-18. The line will have a peak capacity of 2 400 passengers/h and initial ridership is expected to be 5 600 passengers/day, increasing to 10 100 by 2030.

‘The arrival of these new BART vehicles and the beginning of testing is a visible reminder of the progress being made to further economic growth and improve access to jobs and vital services for East County’s 250 000 residents’, said Dave Hudson, Chair of the Contra Costa Transportation Authority.