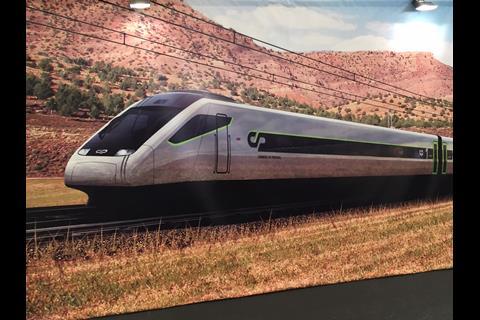 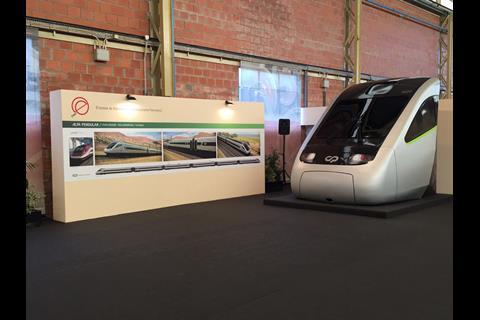 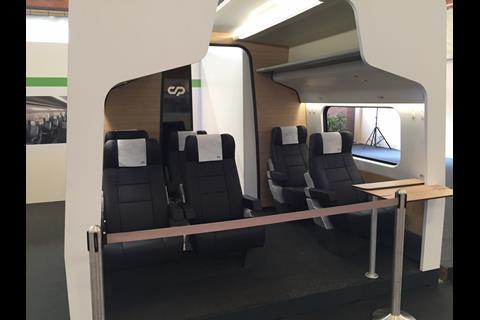 PORTUGAL: National operator CP unveiled the interior and exterior designs for what it termed the ‘next generation Alfa Pendular’ at launch event in Lisboa on January 27.

The designs showcase the planned mid-life refurbishment of CP’s 10 Alfa Pendular tilting trains which are used on premium inter-city services on the Braga – Porto – Lisboa – Faro corridor, running at speeds of up to 220 km/h. A derivative of the Pendolino tilting train, the six car EMUs were supplied in 1999-2000 by a consortium led by Fiat Ferroviaria and including Siemens as traction equipment supplier. They were assembled at the former Sorefame factory in Amadora on the outskirts of Lisboa, which today serves as the headquarters of CP’s maintenance business EMEF.

The refurbishment programme will begin later this year and represents a total investment of around €18m, CP says, although it has been delayed by several years because of budgetary constraints at CP during the recession. The trains will receive new seats and interior panelling plus an external repaint in a grey livery. Access to mobile telecoms networks is to be enhanced in order to improve the quality of onboard wi-fi and multimedia provision. The toilets and bar area are to be remodelled and principal mechanical and hydraulic components extensively overhauled.

The work is likely to take around three months per train, and will be undertaken at EMEF’s main workshops in Entroncamento using mainly materials and components from domestic suppliers.

CP is expected to lease a fleet of broad gauge high speed trainsets from Spanish national operator RENFE to maintain capacity while the Alfa Pendular sets are out of traffic.

Citing ‘the importance of the Alfa Pendular service for reaffirming CP’s competitive edge in medium- and long-distance passenger transport in Portugal’, Manual Queiró, Chairman of CP and EMEF, said that the refurbishment programme would lead ‘to a significant improvement in journey quality and comfort’.