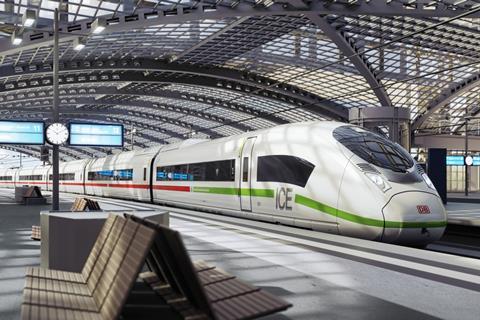 GERMANY: Deutsche Bahn has announced an order for 30 inter-city trains able to run at 320 km/h. Chairman Dr Richard Lutz confirmed on July 15 that the operator had placed an order worth €1bn with Siemens Mobility for a derivative of the ICE3 design. The contract includes an option for a further 60 trainsets.

The fleet will be deployed from the end of 2022 on routes between Dortmund in Nordrhein-Westfalen and München via the Köln – Frankfurt high speed line which is designed for operation at 300 km/h. All 30 sets will be delivered by 2026, and plans envisage that some of the fleet will in due course be equipped to operate in Belgium and the Netherlands. Each train will seat 440 passengers.

The order comes at a time when long-distance rail travel in Germany has plummeted because of Covid-19.

Lutz said that ‘even though demand has sharply declined due to the coronavirus pandemic, everything speaks in favour of climate-friendly rail transport for the longer term.’ Affirming that ‘DB is investing in new trains at a record level’, Lutz noted that today marks a big step for a strong and environmentally-friendly rail system’.

The announcement confirms the government’s policy to promote expansion of long-distance rail travel as part of a strategy to double the number of rail passengers by 2030 in the light of climate change.

Roland Busch, Deputy CEO and member of the management board of Siemens AG, said that ‘the most important requirement for the ICE order was to get the new trains on the rails very quickly. We can do exactly that by relying on our proven Velaro platform.’

In June 2018 Siemens unveiled its Velaro Novo design, which offers lower weight, improvements in aerodynamic performance and a 15% weight reduction over the Velaro. The concept and some components were tested in a development vehicle dubbed ‘#seeitnovo’ which ran for two years on the DB network, clocking up 100 000 km. The trials included a spell when the car was marshalled in DB’s ICE-S high speed test train, attaining 331 km/h on one occasion.

Asked to what extent components or technology developed for the Velaro Novo concept would be used on the new fleet, Siemens said that ‘we will use the latest developments, especially in the area of passenger experience, for example new windows, but also a new galley and other interior equipment’. The new trains will have tinted windows that will allow mobile phone reception, including 5G, without the use of repeaters.

Because of the 4% gradients on the Köln – Frankfurt line, the fleet will be equipped with eddy-current brakes, as fitted to DB’s Series 407 Velaro D trainsets.

DB’s decision to order trains capable of 320 km/h implies that future high speed lines may be designed for higher speeds than those permitted on DB’s existing high speed lines ― only the Köln – Frankfurt, Ebensfeld – Erfurt and Nürnberg – Ingolstadt routes currently permit 300 km/h, with earlier lines such as Hannover – Würzburg and Mannheim – Stuttgart being limited to 280 km/h.

DB is currently taking delivery of the ICE4 fleet –137 sets are on order – and it placed an order in February last year for 23 push-pull Talgo trains for inter-city routes as part of a framework contract for 100 sets. It also acquired 17 double-deck 200 km/h EMUs from Austria’s Westbahn at the end of last year.