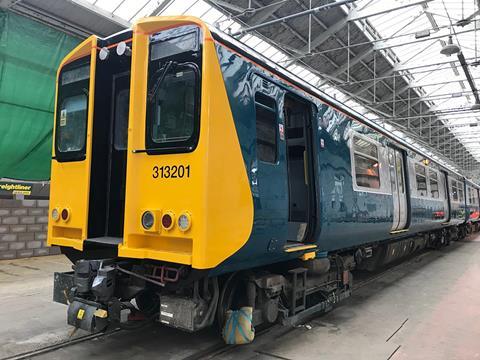 UK: Knorr-Bremse RailServices in Wolverton is undertaking the C6 overhaul of 19 Class 313 EMUs which Beacon Rail leases to Govia Thameslink Railway for use on Southern’s Coastway services,

The C6 programme includes work on the door mechanisms, air systems and bodywork, as well as accessibility improvements and fitting LED lighting.

As part of the programme, EMU number 313 201, ‘the country’s first-ever second-generation electric multiple-unit’ which was built by British Rail Engineering Ltd’s York works in 1976, has been returned its original British Rail blue and grey livery, albeit with some changes to accommodate modern accessibility requirements for tonal contrast on the doors.