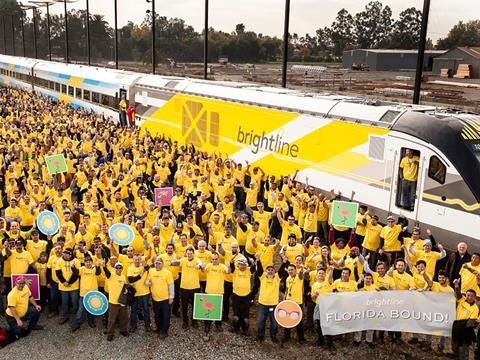 USA: The first of five trainsets which Siemens is building for the privately-financed Brightline inter-city project has arrived in Florida following a 4 900 km journey by rail from the manufacturer’s Sacramento plant.

The trainsets will each comprise four stainless-steel coaches, top-and-tailed by diesel-electric locomotives. The initial trainset carries a blue livery, and will be followed by the pink, red, orange and green sets which are scheduled to be delivered by the end of March.

‘Having our first Brightline trainset completed is a major accomplishment and brings us one step closer to the introduction of our innovative new train service’, said Brightline President Michael Reininger on December 14. ‘Our operations team will begin the required testing as we ready to launch Brightline between Miami, Fort Lauderdale and West Palm Beach next summer.’

Michael Cahill, President of Siemens Rolling Stock, said construction of the trainset involved ‘the latest in modern manufacturing techniques, a vast supply chain and leveraged the best in Siemens engineering and manufacturing know-how’, with components coming from over 40 suppliers across more than 20 states.

Siemens will also be responsible for maintenance of the fleet, which is expected to provide full-time employment for approximately 70 Siemens and 40 Brightline employees.

· An in-depth feature on the Brightline project appeared in the August 2016 issue of Railway Gazette International magazine, which subscribers can access in the digital archive.