Framework agreement for up to 60 EMUs signed 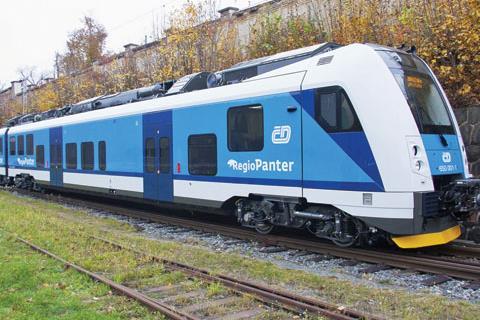 CZECH REPUBLIC: National operator ČD has signed a framework agreement with Škoda Transportation and Škoda Vagonka covering the supply of up to 60 RegioPanter regional electric multiple-units with a potential value of almost KC9·6bn. One other bid was submitted.

Firm orders are to be placed as and when financing is secured by the operator. An initial 29 EMUs are expected to be delivered to the Moravskoslezský region from 2023, with 27 units for the Olomouc area to follow subject to agreements being reached with the regional authority.

‘Our RegioPanters represent a new, modern era of travel’, said Škoda Transportation Chairman Petr Brzezina when the agreement was announced on November 13. ‘In recent years, we have produced more than 50 of them for ČD, including InterPanter units, and more are currently in production. These state-of-the-art trains carry passengers not only in most regions of the Czech Republic, but also in Slovakia and soon in Latvia.’