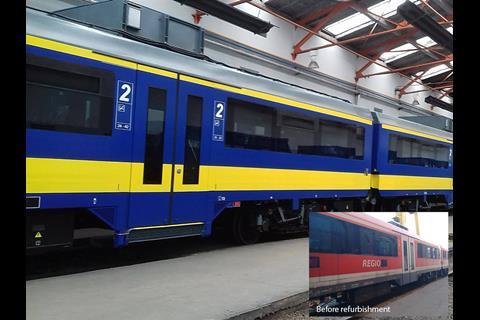 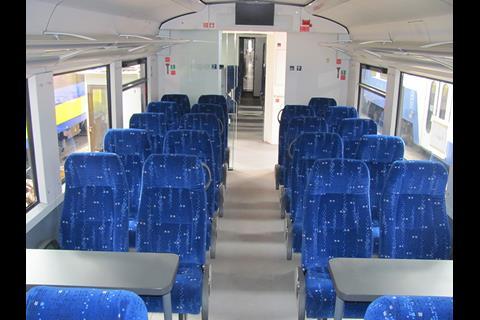 GABON: Coaches formerly used by DB Regio in Germany are being refurbished by Electroputere VFU Pașcani in Romania for use on Libreville – Franceville overnight services operated by Sociéte d'Exploitation du Transgabonais. The first batch of nine vehicles was shipped at the end of May and is expected to arrive in Gabon shortly.

The deal was arranged by with the help of DAXI Belgique. The Bpyz456 coaches arrived at Pașcani in mid-2016, and the redesign and refit was completed in nine months. Four cars have been rebuilt as first class vehicles with 54 seats in a 2+1 configuration, while five are fitted out as second class cars with 84 seats arranged 2+2.

This required major electrical work, including upgrading the HVAC with two powerful roof-mounted cooling packs suited to the equatorial climate. Power sockets have been fitted at every second seat, and a passenger information system installed with two exterior and six interior screens. Wi-fi has been provided, and an ethernet connection between cars enables multimedia content to be delivered from the conductor’s compartment.

New seats have been installed and the floors replaced. Fresh water tanks with a capacity of 1 000 litres are hung from the underframe, this being sufficient for the journey along the Transgabonais route without refilling.

The cars are designed to accept three-phase 400 V AC power from a generator car, but 24 V batteries are used to operate the doors, newly-installed LED lighting and emergency equipment.

The cars have been painted in Setrag’s blue and yellow livery, and the windows have been fitted with tinted glass. Doors have been equipped with automatic steps for boarding from low platforms.

Another batch of 11 refurbished cars is scheduled to follow by the end of 2017, including two first and four second class cars, three restaurant cars with kitchenettes and two VIP cars.

Setrag staff visited Romania for training that included familiarisation with the new equipment and maintenance procedures.