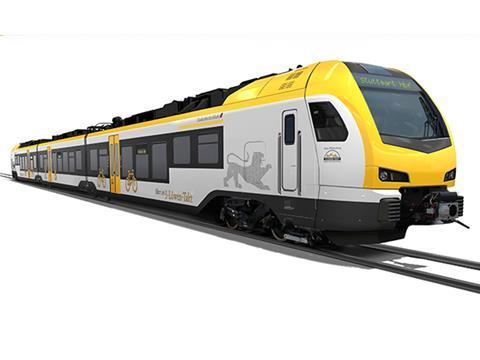 GERMANY: The German subsidiary of UK-based rail and bus group Go-Ahead has awarded Stadler Pankow a contract to supply 45 Flirt3 electric multiple-units for use on services which it is to operate under contract to the Land of Baden-Württemberg from June 2019.

Announcing the order on May 11, Stadler said the 160 km/h low-floor EMUs would have a 'bright, inviting' interior, with luggage and bicycle spaces, spacious door areas and sliding steps. They will have 10 first class seats, with 165, 217, 273 or 329 standard seats, and passenger wi-fi will be provided. There will be an accessible toilet in each unit, and two toilets in the four-car units. The EMUs will carry the Land's ‘three lions’ livery.

Berlin-based Go-Ahead Verkehrsgesellschaft Deutschland GmbH was formed in 2014, and won its first operating contracts when it was named the winner of two of the three Stuttgart Netz 1 contracts on November 17 2015. Deutsche Bahn challenged the decision, but this has now been resolved.