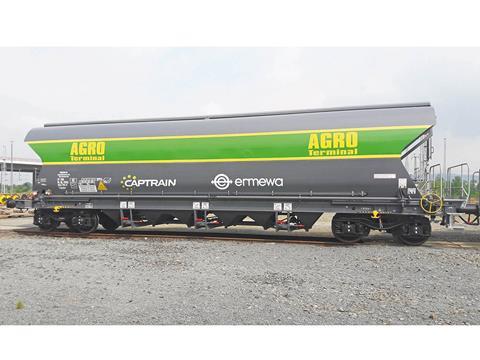 GERMANY: Captrain Deutschland company ITL has put into service the first 37 of 74 grain hopper wagons which it has ordered from Tatravagónka through leasing company Ermewa. The remainder of the fleet is scheduled for delivery later this year.

The Tagnpps hoppers have a capacity of 101 m3. They will used exclusively on trains operated on behalf of animal feed company HaBeMa Futtermittel, with ITL providing an average of six round trips per week between the AGRO terminal at Heidenau near Dresden and the Port of Hamburg.

‘With the use of modern vehicles, we have once again succeeded in significantly increasing productivity and efficiency’, said ITL Managing Director Jérôme Méline on June 12.

‘The efficient and reliable supply of our sites by rail is a key element in our commitment to be one of the most efficient trading partners in the animal feed market’, said Jes-Christian Hansen of HaBeMa Futtermittel.