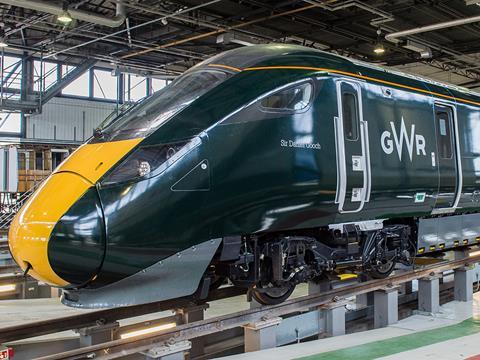 UK: The first of the Class 800 trainsets which Hitachi is building for operation by Great Western Railway under the Department for Transport’s Intercity Express Programme was officially unveiled on June 30, when it carried guests from Reading to London Paddington on the 175th anniversary of the first train running from Bristol to London.

Hitachi is supplying GWR with trainsets under two contracts. The first covers 57 trainsets which are to be supplied under the IEP to operate between London and Reading, Oxford, Swindon, Bath, Bristol and South Wales as well as on the North and South Cotswold lines. They are expected to enter passenger service from the summer of 2017.

Hitachi will also supply GWR with 22 five-car and seven nine-car Class 802 electro-diesel trainsets, designated the by the manufacturer as the AT300, which are being procured by the franchisee under a £361m contract signed with leasing company Eversholt Rail in July 2015. These trainsets are to be used from 2018 on services from London to Somerset, Devon and Cornwall, and have larger fuel tanks to cope with the longer journeys and a higher-rated engine output to tackle the steeper gradients.

‘The new trains will result in more frequent and faster journeys and an increase in the number of seats’, said GWR Managing Director Mark Hopwood. ‘These, and a range of further passenger benefits, will enable communities and businesses across the Great Western network to prosper and we are delighted to invite observers to witness first-hand the step change electrification and our new fleet will bring.’