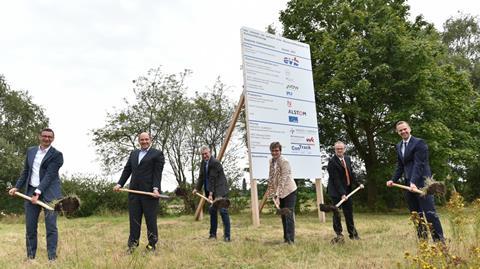 GERMANY: A groundbreaking ceremony has formally marked the start of construction of a hydrogen train fuelling point in Bremervörde.

This will serve the fleet of 14 Alstom Coradia iLint fuel cell multiple-units which Niedersachen transport authority LNVG has ordered for use by Eisenbahnen und Verkehrsbetriebe Elbe-Weser on passenger services between Cuxhaven, Bremerhaven, Bremervörde and Buxtehude from 2022.

The hydrogen filling station will be built and operated by gases and engineering company Linde. It is scheduled for completion in mid-2021, to replace a mobile facility provided for the initial operation of two pre-series iLint units.

It will have a capacity of around 1 600 kg of hydrogen per day. This will enable all 14 units to be refulled every day, providing a range of 1 000 km which is sufficient for a full day of operation. 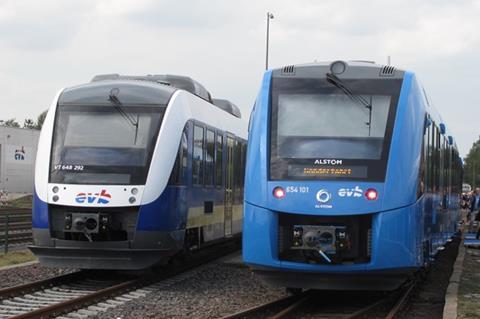 The filling station will have provision for future expansion to enable hydrogen to be produced on-site using electrolysis and regenerated electricity.

‘Linde has long been committed to hydrogen, which can make a significant contribution to decarbonisation’, said Mathias Kranz, who heads the company’s on-site and bulk business in Germany. ‘The introduction of hydrogen as a fuel for trains will significantly reduce the burden on the environment, as 1 kg of hydrogen replaces approximately 4·5 litres of diesel fuel.’

The project is being subsidised by the Federal Ministry of Transport & Digital Infrastucture’s hydrogen and fuel cell innovation programme. NOW GmbH is co-ordinating the funding, with Project Management Jülich responsible for implementation.

In November 2017 LNVG awarded Alstom a contract to supply a fleet of 14 Coradia iLint units along with the fuel and provide 30 years of maintenance at its Salzgitter site. Two iLint trainsets entered passenger service in September 2018, and the period of trial operation was formally completed in May

‘Our passengers were very curious about the trains and their technology from the very beginning’, said Andreas Wagner of operator EVB. ‘In addition to the very low noise level, the hydrogen train impresses with its zero emissions, especially in times of climate change.’