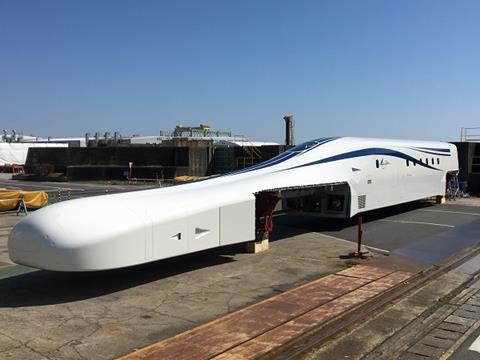 JAPAN: The latest design of prototype Series L0 maglev vehicles for the Chūō Shinkansen line has been unveiled by JR Central at Hitachi’s Kasado works in Kudamatsu.

The older L0 prototype has seven cars, with one end car and an intermediate car to be replaced by the latest versions for trials on the Yamanashi maglev test line in late May.

The older prototype uses gas turbine generators to power the interior lighting and air-conditioning, while the newer design uses a wireless connection to the ground supply.

JR Central hopes to begin commercial maglev services between Tokyo and Nagoya in 2027, with the Nagoya – Osaka section planned for completion by 2037.