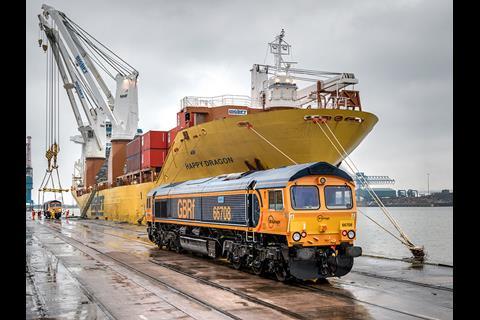 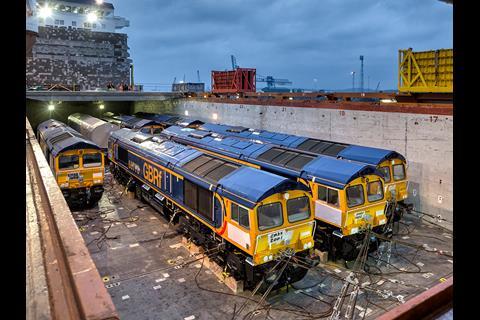 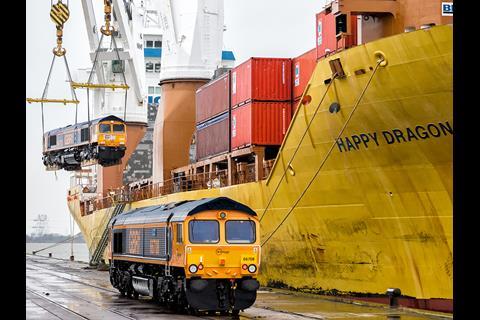 UK: What manufacturer Electro-Motive Diesel and operator GB Railfreight expect to be the final batch of Class 66 locomotives to be built arrived at the port of Newport in Wales on February 12. The seven locomotives were unloaded the following morning, and take GBRf’s Class 66 fleet to 78 locomotives.

The first JT42CWR Class 66 locomotives were delivered to English Welsh & Scottish Railway (now DB Schenker Rail UK) in 1998, and the type has subsequently been supplied to operators across Europe, as well as to Egyptian National Railways and to Setrag in Gabon. However, the design does not comply with the latest European Union emissions regulations, and a flexibility period allowing orders for Stage IIIA-compliant engines expired at the end of December 2014.

‘Today serves as a milestone with the delivery of our last Class 66 locomotives’, said Billy Ainsworth, President & CEO of EMD parent company Progress Rail Services when the GBRf locos were delivered. ‘We are currently developing new generations of locomotives to meet our customers' demands around the globe.’

The delivery ‘marks the end of the Class 66 builds and these locomotives will be the last to arrive on UK soil’, said John Smith, Managing Director of GB Railfreight. ‘The rail freight industry now needs to work together to deliver a new generation of diesel locomotives that are legally compliant with the EU's new diesel emissions regulations.’