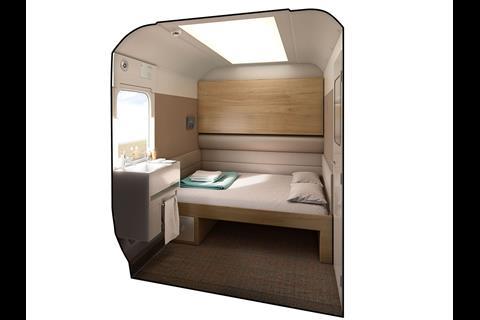 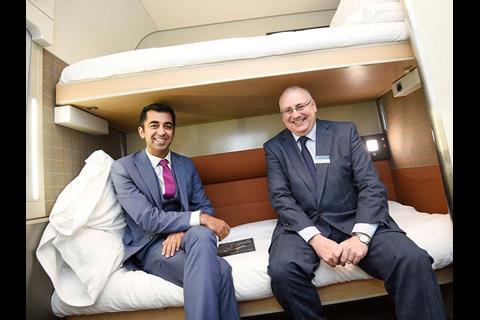 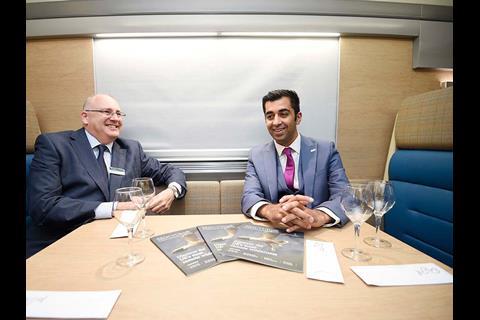 UK: A mock-up of the interior design for the coaches which CAF is building for Caledonian Sleeper overnight services between London and Scotland has been built in a warehouse near Edinburgh to gather feedback from stakeholders.

Interior designer Ian Smith is responsible for the look and feel of the new coaches, which is intended to reflect 'contemporary Scotland'. Accommodation is to include first class cabins with toilets and showers, improved standard class cabins, pod flat-beds for 'affordable comfort' and standard class cradle seats. There will be a brasserie club car, and cabins will have key card entry systems and facilities for charging mobile devices.

'We have made a number of improvements to the design plans for the new Caledonian Sleeper based on discussion with stakeholders and model testing, most notably the introduction of double beds which will enhance the Caledonian Sleeper's reputation for being one of the world's most enchanting travel experiences', said Peter Strachan, Managing Director of the operating franchise which is held by Serco.

Over £150m is being invested in the new fleet of 75 CAF cars, part-funded by a £60m capital grant from the Scottish Government. Entry into service is planned for April 2018. 'We wanted a new sleeper service that incorporated cutting edge design, top-class passenger catering and a service that was emblematic of the very best Scotland has to offer', said Minister for Transport & Islands, Humza Yousaf when visiting the mock-up on June 30. 'We also wanted a service that would enhance travel options to and from London as well as encourage more tourists to visit Scotland.'