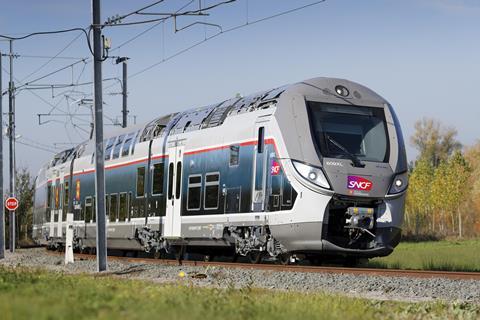 FRANCE: SNCF has awarded Bombardier Transportation firm contracts to supply 27 more 10-car Omneo Premium double-deck electric multiple-units for use on long-distance services, acting on behalf of the Normandie region which is funding the orders.

The €162m order for 11 units announced on June 23 and a €245m order for 16 which was finalised on May 16 have been placed within a 2010 framework contract which provided for up to 860 trainsets to be ordered by SNCF on behalf of regional authorities.

Normandie has ordered a total of 67 units since November 2016, with the first entering service between Paris, Caen and Cherbourg on February 17. The EMUs have an interior and exterior designed to match the region’s visual identity.

The region expects plans to roll out the latest batch of the ‘spacious, more comfortable’ EMUs on its Krono+ inter-city services from Paris to Vernon and Rouen and Paris to Evreux and Serquigny from the end of 2023.