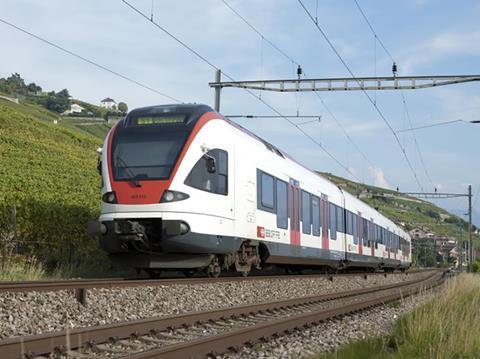 SWITZERLAND: Swiss Federal Railways, Thurbo and RegionAlps have jointly called tenders for the supply of 194 single-deck regional trainsets of a ‘tried and tested platform already in use in a European country’.

The order worth up to SFr1∙5bn which was announced on May 18 would allow the three operators to standardise their regional fleets and to take advantage of common design features.

There would be options for a further 316 sets, taking the total to 510 units. The first trains would enter service in December 2025, and deliveries would continue until 2048.

Applications to participate must be received by July 3. The prequalification process would run to November 2, after which up to three bidders will be asked to submit tenders by March 26 2021.

SBB is also representing Transports Publics Fribourgeois, Transports Publics Neuchâtelois and Compagnie des Chemins de Fer du Jura in the procurement. The trains should be suitable for operation in Switzerland, Germany and Austria, and there is an option to obtain approval for use in France.

SBB envisages two builds of stock. The first would replace the 98 trains in its Domino fleet and Flirt units acquired up to 2011, with delivery stretching from 2024 to 2035. A second type would then replace all other single-deck regional stock still in use, with deliveries scheduled between 2037 and 2048.

RegionAlps will replace all its current fleet of 13 Domino trainsets and the four Nina sets that operate St-Bernard Express services between Martigny, Orsières and Le Châble.