Parcels van to be developed for Beijing – Moscow – Berlin route 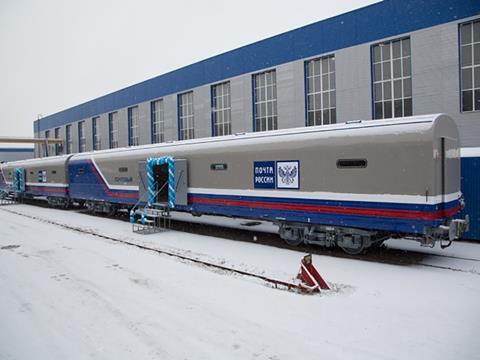 INTERNATIONAL: Transmashholding’s Tver Carriage Works, Siemens and Russian Post have a signed a memorandum of understanding for the development of a van design to carry international parcels traffic between China, Russia and Europe.

Russian Post said it processed 100 million international shipments in the first half of 2016, double the figure for the same period in 2015, and only rail is able to handle goods which cannot be sent by air, such as electronic devices with lithium ion batteries.

The signatories envisaged that the vehicles would initially be used between Beijing, Moscow and Berlin. The design would comply with Russian and European requirements, including RIC standards, and be equipped for use on 1 520 mm and 1 435 mm gauge routes.

Tver Carriage Works has produced 50 Type 61-4504 and 61-4505 mail vans for Russian Railways since 2015, and worked with Siemens on the production of RIC compliant passenger coaches which are now in use on routes from Moscow to destinations including Helsinki, Berlin and Paris.