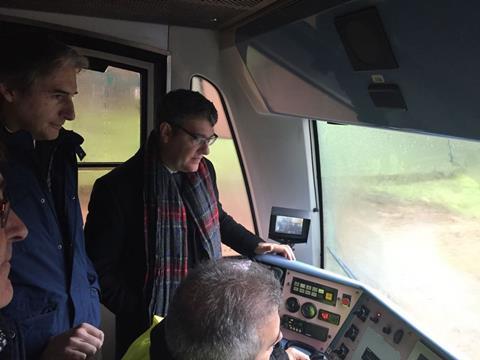 SPAIN: Development Minister Íñigo de la Serna joined Energy Minister Álvaro Nadal on January 8 to mark the start of what is claimed to be the first trial of liquefied natural gas as a fuel for passenger rail traction, being undertaken by national operator RENFE in conjunction with Bureau Veritas and gas suppliers Gas Natural Fenosa and Enagás. To enable a direct comparison between LNG and diesel, one of the two diesel engines powering a 1 000 mm gauge two-car Class 2600 DMU has been replaced with an LNG engine. The modified DMU is operating over a 20 km section of the former FEVE network between Trubia, Baíña and Figaredo in the Asturias region of northern Spain.

Compared with diesel, LNG is expected to reduce CO2 emissions by up to 30% and of CO by up to 90%. Emissions of SO2 could be reduced by up to 99% and of particulates by 90%. As a cheaper fuel, LNG could also reduce operating costs and provide an alternative to electrification. Should the trials prove successful, LNG traction could be introduced throughout Route C8f running from Baíña to Collanzo.