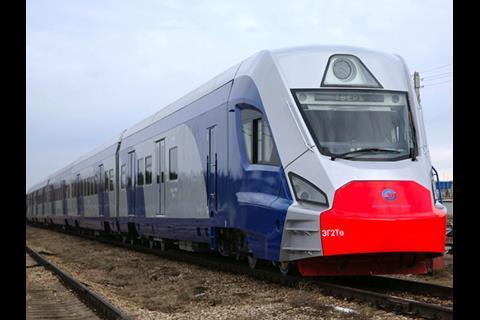 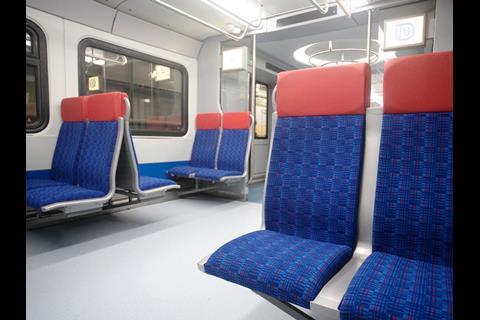 RUSSIA: The first of two prototype EG2Tv electric multiple-units developed by Transmashholding’s Tver Carriage Works has arrived at the Shcherbinka test circuit near Moscow, where it is to undergo certification trials ready for potential series production.

TMH is developing the EG2Tv as the basis for a new generation of EMUs for the 1520 mm gauge market. This would combine modern technology similar to that employed by foreign manufacturers with the Tver plant’s lower costs and extensive experience of Russian operating conditions.

The design has been developed by TMH and Spanish company Integral Design & Development with a particular focus on Russian content. More than 80% of the prototype’s components were produced domestically, and TMH expects that this figure would be higher for production units.

The prototype is a five-car 3 kV DC unit with 226 seats and a total capacity of 836 passengers. Production EMUs would be offered in lengths of four to 12 cars, with a range of interior options suitable for inner and outer-suburban, regional or inter-regional duties. These would have a maximum speed of 120 or 160 km/h, and a 250 km/h option is also proposed.

The coaches have wide doors for rapid boarding and alighting, and modular construction which is designed to facilitate changes to the seating layout or the installation of vending machines, luggage racks and cycle spaces. The air-conditioned EMU has GPS and Glonass-based passenger information systems, and wi-fi could be installed if required.

The cars also incorporate crash energy absorbing elements, which TMH says is a first for a domestically-produced EMU.