RegioPanter EMUs for Plzeň on test 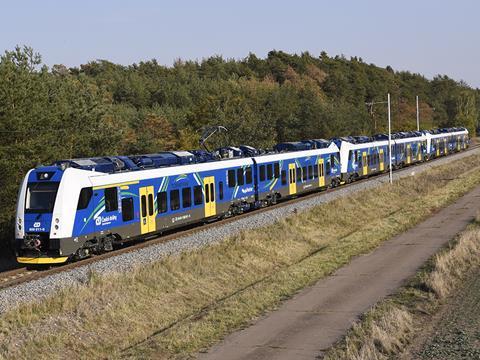 CZECH REPUBLIC: The first of nine two-car Class 650 RegioPanter electric multiple-units which national operator ČD has ordered from Škoda Transportation for use on the Pňovany – Plzeň – Horažďovice line is undergoing trials at the Velim test circuit, ahead of entry into service with the December timetable change.

The 3 kV DC/25 kV 50 Hz AC dual-voltage low-floor EMUs are similar to eight which ČD has operated on regional services around Plzeň and Brno regions since 2012-14. They have a maximum speed of 160 km/h, and the air-conditioned interiors feature 147 seats, 230 V power sockets, wi-fi and a modern passenger information system. The livery was chosen in a publicity campaign launched by the Plzeň region.

The KC990m order for the nine units was placed in September 2017 within a framework for up to 11 units which had been signed in February 2015, co-funded by the European Union.