Rhein-Ruhr-Express trains are ready to roll 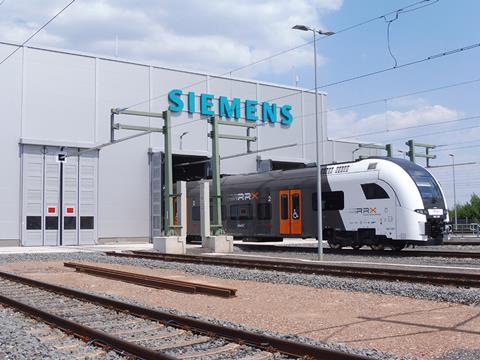 GERMANY: The first Desiro HC EMUs being built for Rhein-Ruhr Express services by Siemens Mobility are on course to enter service with the December 9 timetable change, following their formal approval by the Federal Railway Office using its new authorisation process.

Under a €1·7bn contract from a consortium of local authorities in Nordrhein-Westfalen, Siemens is supplying a fleet of 82 four-car EMUs, and will also maintain them for 32 years at a new depot in Dortmund-Eving which opened in September. Each 105 m long unit is formed of two single-deck driving motor cars and two double-deck trailers, providing 364 second class and 36 first class seats plus space for 462 standing passengers.

The manufacturer reported on December 5 that 15 Desiro HC EMUs were ready to enter service, although it is unclear how many have been formally accepted by the customer. Pending the launch of the full RRX network once the related infrastructure improvements have been completed, the first trains are to be phased into service on route RE 11 between Düsseldorf, Essen, Dortmund, Hamm and Kassel, which is operated by Abellio NRW.

The scheduled RRX ramp-up envisages that the new fleet will be deployed on National Express-operated routes RE 5 (Wesel – Koblenz) and RE 6 (Minden – Köln) from June and December 2019 respectively, followed by Abellio-operated RE 1 (Aachen – Hamm) in June 2020 and National Express route RE 4 (Aachen – Dortmund) at the end of that year.