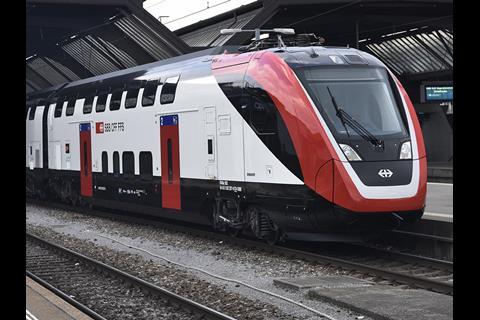 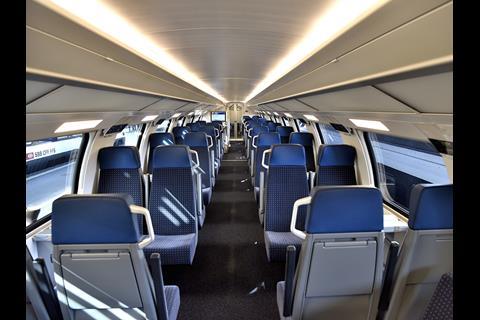 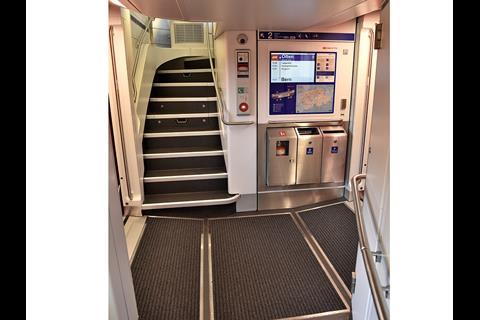 SWITZERLAND: Swiss Federal Railways ran the first of its fleet of Bombardier Transportation Twindexx double-deck electric multiple-units in commercial service on February 26. The first train was IR2368, the 11.55 from Zürich to Olten and Bern.

When SBB signed a contract with Bombardier on May 12 2010 for 59 double-deck EMUs for long-distance services, it envisaged that the first train would be carrying passengers towards the end of 2013. The first 20 sets were to have been delivered by mid-2015, with 40 available by mid-2017 and the entire fleet operational by the end of 2019.

Valued at SFr1·35bn at the time and now worth SFr1·86bn, the contract covered three versions of the train, known as FV-Dosto, short for Fernverkehr-Doppelstocktriebzug, meaning long-distance double-deck EMU. There were 20 eight-car EMUs for Intercity services, each equipped with a restaurant car; 30 eight-car sets for Interregio services; and nine four-car Interregio sets. SBB envisaged that the FV-Dosto would be able to operate into Germany and Austria.

In autumn 2011 Bombardier completed a full-size mock-up which was used to introduce the design concept to customers and user groups, including those representing people with disabilities. A number of detailed changes were made to the design, but not all wishes could be accommodated. Soon afterwards disability groups submitted a legal challenge about the design of the catering area of the 20 Intercity trainsets. Their subsequent partial victory led to design changes and to an initial delay in construction of the fleet.

In 2012 Bombardier made it known that there were technical problems with the design of the bodyshells, leading to further delays estimated at the time at two years. The first FV-Dosto set was completed at Bombardier’s Hennigsdorf factory towards the end of 2014, and SBB announced that a revised schedule had been agreed, with delivery of the trains rescheduled for 2017-20. In compensation, Bombardier would build three additional eight-car Intercity trainsets, taking the total fleet to 62 sets.

SBB confirmed in June 2015 that two pre-series Twindexx sets had met the required quality and technical standards, and trials began at the Velim test ring in the Czech Republic and on the Swiss network. But it was not until May 11 2017 that Swiss media representatives were able to ride a test train, between Bern and Interlaken.

Further technical problems were reported during the summer of 2017, allegedly with traction motors, converters, electronic components and software. SBB insisted that it would only accept the trains once they were running reliably.

Bombardier largely succeeded in rectifying the faults, and in November 2017 the Federal Office for Transport authorised entry into service on an interim basis until November 30 2018. It stated that ‘not all planned functionalities are operational’, but once these issues had been resolved, unrestricted use would be permitted.

More recently, an organisation representing disabled people submitted another legal claim, suggesting that the ramps in the door areas were too steep for wheelchair users. The geometry of the ramps in fact complied with the norms in force and had been successfully tested on the mock-up in 2011. SBB contested the claim and on February 16 the Supreme Administrative Court ruled largely in SBB’s favour. This paved the way for SBB to put six FV-Dosto sets into commercial service.

The trains are now running on the Zürich – Bern and Zürich – Chur routes, and SBB plans to gain as much experience with the first few trainsets as possible before they are introduced on other routes. Subject to a definitive court ruling, SBB will progressively put the trains into service across the network from the December 2018 timetable change, including on the busy St Gallen – Zürich – Bern – Genève corridor.