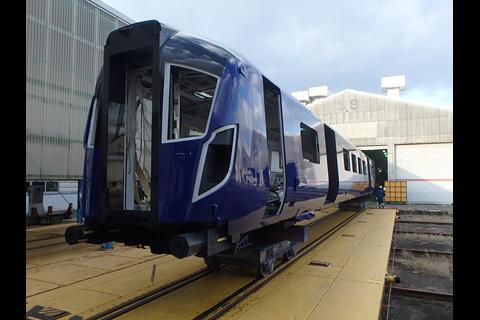 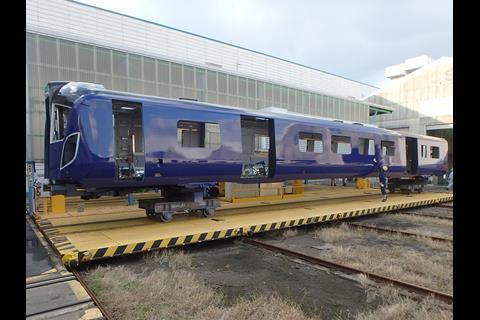 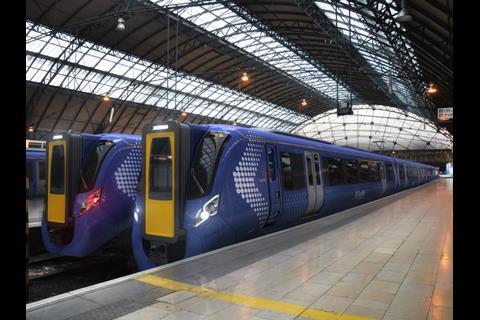 UK: The first of 70 Class 385 electric multiple-units ordered by Abellio for the ScotRail franchise is now under construction at Hitachi’s factory at Kasado in Japan. The first seven of the 25 kV 50 Hz EMUs are to be built in Kasado, with the remaining 63 to be produced at Hitachi’s UK plant in Newton Aycliffe.

Abellio named Hitachi Rail Europe as preferred bidder to supply and maintain the new fleet of EMUs on October 9 2014, the day after it won the current ScotRail franchise. The order comprises 46 three-car and 24 four-car units, which are scheduled to enter service on the Edinburgh – Falkirk High – Glasgow, Stirling – Alloa – Dunblane and south Glasgow suburban routes between late 2017 and the end of 2018. The contract includes 10 years of maintenance.

This is the first order for Hitachi’s AT200 EMU design, which features 23 m long cars, cab-end gangways and a maximum speed of 160 km/h. The air-conditioned EMUs will have tables, toilets, LED lighting, power sockets and wi-fi.

The EMUs are being financed by SMBC Leasing’s Caledonian Rail Leasing special-purpose vehicle. The Scottish Government has guaranteed their use for at least 25 years, at which point it could acquire the fleet for a nominal £1.