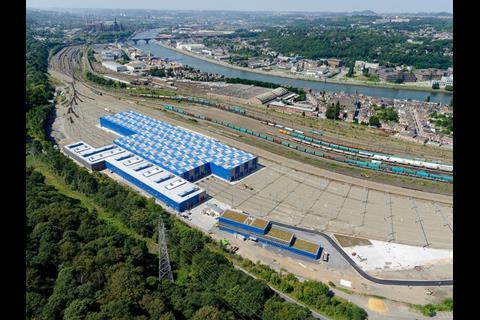 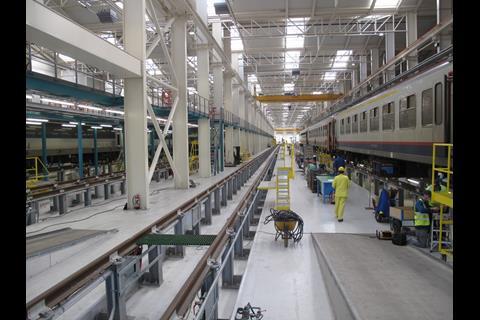 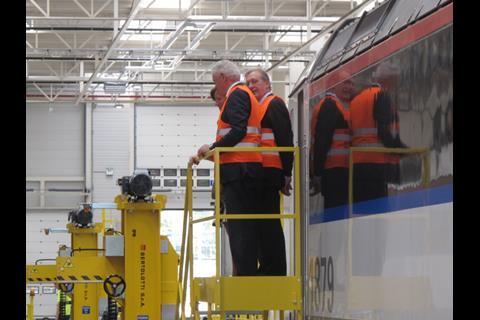 BELGIUM: Celebrations were held in Liège on April 19 to mark the opening of SNCB’s new rolling stock maintenance workshops at Kinkempois. Intended to maintain locomotives, EMUs and coaches, the facility has been developed on the site of a former freight depot, incorporating a wagon repair shop dating back to 1929.

The facility has been developed by SNCB Technics at a total cost of €78m, of which €34m was spent on complete design and engineering by Bureau Greisch and architects Canevas. Infrabel spent €35m on reconfiguring the trackwork and connecting the workshops with the main station at Liège Guillemins.

With a covered area of more than 17 000 m², the workshop has 17 interior tracks, of which five through roads are 258 m long to accommodate complete trains. Three of those tracks have high level platforms for access to roof-mounted equipment. A car washing plant has been provided, while the wheel lathe from the old workshop is to be relocated to the new facility.

Kinkempois becomes one of four main workshops, nine traction depots and 18 support locations where SNCB maintains its fleet of 2 800 vehicles. It is responsible for outstations at Liers, Ronet, Ottignies, Liège and Welkenraedt.

Employing a total of 314 staff, the Kinkempois workshop will be responsible for 120 electric locomotives of classes 18 and 27, 20 Class 77 diesel-hydraulic locomotives and a small number of GM-built class 55 and 62 diesel locos used by Infrabel for engineering trains. It will also maintain 36 refurbished two-car AM class EMUs and 60 three-car AM80 units, plus 121 M4 and 30 I10 loco-hauled coaches. In future, the workshop will also maintain the new M7 double-deck trainsets. The workshop also deals with the complete overhaul of DC traction motors.

All vehicles are inspected every 20 000 km or at least once a month, with a one-day servicing visit for parts replacement every three months. General overhauls are undertaken every eight years, with a mid-life refurbishment after 16 years. To support a move towards condition-based maintenance, SNCB is fitting its fleet with onboard monitoring sensors; at present around 30% of the fleet is equipped, and this figure is expected to reach 80% by 2023.

The operator also expects to invest a further €300m on modernising its maintenance facilities over the next five years.