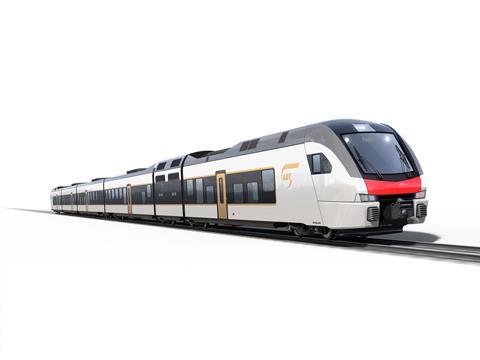 The first four trainsets to be delivered, starting in 2022, will be DMUs for inter-city services. These will include a power module with four diesel engines, bringing the length of the trains to 106·8 m. They will feature 271 seats in two classes, as well as a buffet.

The DMUs are being delivered first so that they can be used during the conversion of main lines in Azerbaijan from 3 kV DC to 25 kV AC.

The remaining six trainsets will be 93 m long EMUs, of which three would be used for inter-city services. These will have 236 seats, with the other three trains to operate on regional and suburban services containing 255 seats. All the 1 520 mm gauge trainsets will be 3 480 mm wide and 4·6 m high.

This is not Stadler’s first order from ADY. In 2014 the operator ordered sleeping cars for international services, and in 2015 and 2018 Stadler also won two contracts for double-decker Kiss trainsets.