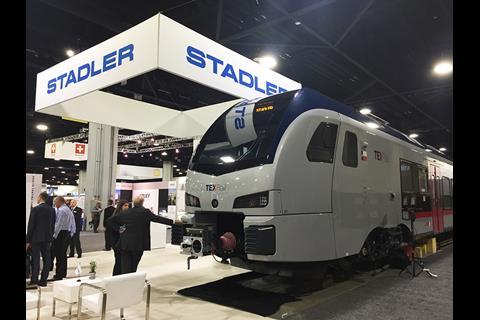 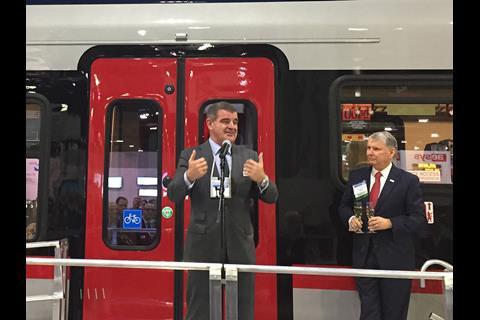 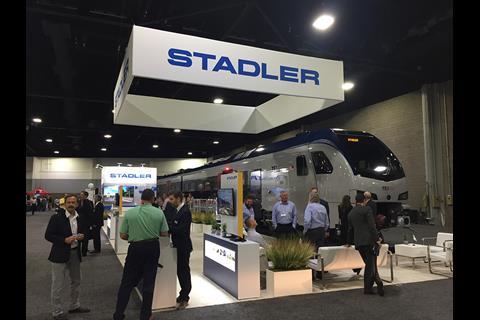 USA: Stadler displayed its first US-built Flirt diesel multiple-unit at the APTA exhibition in Atlanta on October 9. Unveiling three of the six cars from the initial trainset, Martin Ritter, CEO of Stadler US, said it was the company’s first ‘self-propelled commuter rail train to be Federal Railroad Administration-compliant’.

Ritter told Railway Gazette that he sees significant potential in the US commuter rail market, suggesting that Stadler was the only supplier offering ‘truly state of the art’ rolling stock.

The Flirt is the first of a batch of eight which Stadler is to supply to Fort Worth Transportation Authority under a $100m contract agreed in June 2015. The DMUs will be used on the 43 km TEX Rail route linking central Fort Worth with Dallas-Fort Worth International Airport which is due to open in 2018.

While Stadler had won previous orders in the US market, this was the first for the Flirt family. It is also the first to include federal funding, and so subject to Buy America regulations requiring 60% of the contract value to be sourced in the USA. The aluminium bodyshells and bogies are being produced in Switzerland, with final assembly taking place at a workshop in North Salt Lake, Utah, which is rented from Union Pacific.

The 130 km/h DMUs will have two Deutz TCD 16.0 V8 520 kW diesel engines complying with EPA Tier 4 Final emission standards housed in a centre module. The units provide ‘best-in-class comfort and acceleration’, Ritter said, with 224 seats with side tables and USB sockets, as well as an Americans with Disabilities Act toilet.