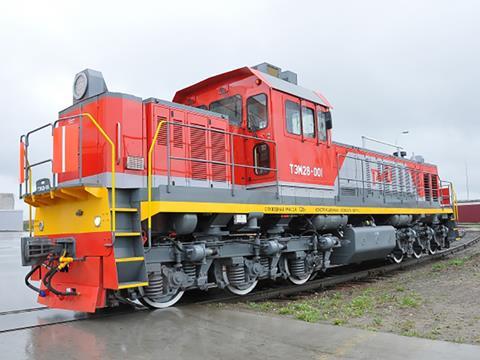 RUSSIA: A prototype TEM28 diesel shunting locomotive built at Transmashholding’s Bryansk Engineering Plant is undergoing four months of trials at Russian Railways’ Penza depot, where its performance is being compared with the earlier TEM18 design under identical operating conditions.

The six-axle TEM28 is assembled with five modules containing the 895 kW engine and generator, electrical equipment, cooling equipment, braking systems and the cab. This modular design is intended to facilitate the transfer of repair activities from locomotive depots to the manufacturer’s sites, which it is hoped would reduce downtime and speed up the development and deployment of new technology.

The tests will look at efficiency, fuel consumption and reliability, as well as the drivers’ response to the air-conditioned cab which is intened to be more comfortable and offer better all-round visibility. Subject to successful completion of the tests by October, RZD plans to place an order for a pilot batch of TEM28 locomotives.