Thameslink first with ATO over ETCS 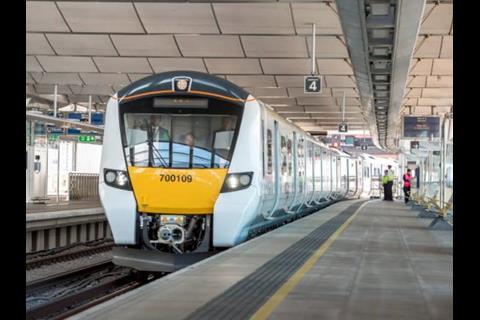 On March 17 a southbound eight-car Thameslink train to Three Bridges operated automatically through the cross-city core between St Pancras, Farringdon, City Thameslink and London Blackfriars, transitioning into ETCS Level 2 on its approach from Kentish Town and back to conventional signalling between Blackfriars and Elephant & Castle.

GTR is using Grade of Automation 2, with the driver checking the platforms, closing the doors and initiating departure from each station. The Siemens-built Class 700 EMU ran between stops using the ATO and cab signalling, opening the doors automatically at the next station.

‘This is a real “world first” and I’m delighted’, said GTR’s Systems Integration Manager Jim Doughty. ‘It is the culmination of a programme which has been running continuously since the start of the £7bn Thameslink Programme. This cutting-edge system will allow us to run our high-intensity Thameslink service of up to 24 trains/h each way, offering 70% more seats through the centre of London’.

The project partners have run nearly 200 night and day shifts of testing since April 2016 when dynamic proving trials began at Network Rail’s ETCS National Integration Facility at Hertford North. Testing of ATO over ETCS started in November of that year. ETCS Level 2 has been overlaid on the conventional lineside signalling through the Thameslink core, with short blocks allowing trains to operate at closer headways.

GTR has had to demonstrate to regulator ORR that it has amended its Health & Safety Management System to operate trains in passenger service using both ETCS and ATO. It has also started a comprehensive driver training programme ready for the launch of full ATO working between St Pancras and Blackfriars at 22 trains/h from May 2019 and through to London Bridge from December 2019.

Network Rail’s Project Director for High Capacity Infrastructure, Martin Chatfield, said ‘seeing the first UK mainline train running in ATO for passenger services is a truly momentous day for the Thameslink Programme and the wider industry teams involved. This underlines the combined efforts of NR, the supply chain, and the train operators over the past five years.’

Read our comprehensive article about the installation of ETCS and ATO through the Thameslink core in the September 2015 issue of Railway Gazette International magazine, available to subscribers in our digital archive.