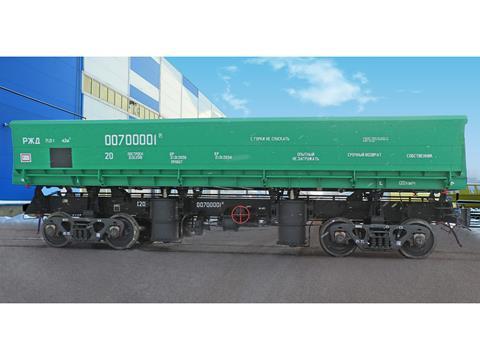 RUSSIA: United Wagon Co is expanding its range with the development of two side tipping wagons for the transport and automated discharge of aggregates and ore.

The wagons were designed by UWC’s All-Union Research & Development Centre for Transportation Technology and are currently undergoing certification, ahead of the planned start of mass production at the TikhvinSpetsMash factory later this year. Intial orders for 20 and 25 wagons have been placed by BrIK and Fast Delivery.

The Type 32-6982 is designed to carry coarser ore, with a capacity of 42 m3 or 71 tonnes. The body structure is designed to withstand higher impact loads during loading.

The side opening and pneumatic discharge systems can tilt the body 45° to either side with simultaneous opening of the sides. Both wagon designs have Type 18-9855 bogies and a design life of 32 years, which UWC says is 10 years more than existing designs.

UWC said Russia’s existing tipping wagon fleet is ‘rather worn and obsolete’, with 30% of the vehicles having exceeded their design life and a further 45% to be life expired within the next five years.