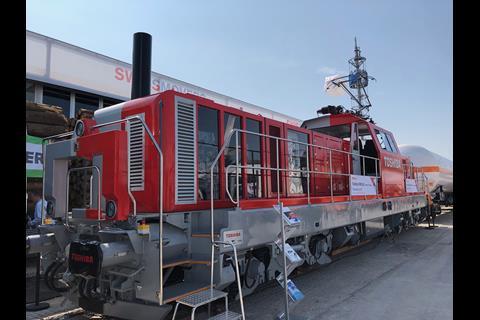 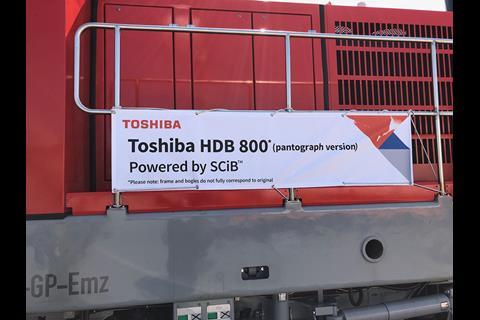 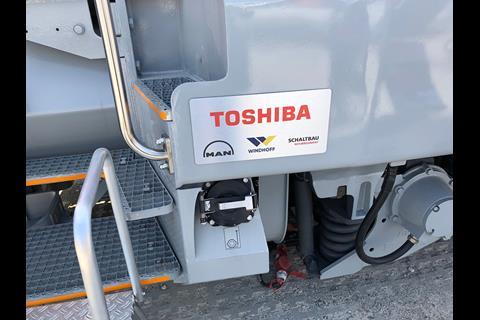 The company has a contract to supply 50 diesel-battery centre cab locomotives to DB Cargo from 2021, TRE Managing Director Hinrich Krey told Railway Gazette. The demonstrator is intended to showcase the company’s design work to date as well as highlighting future development options.

The T-HDB800 displayed in München reuses the frame and bogies from a Schalke SDE1800 heavy industrial shunter. Diesel traction is provided by two MAN 471 kW gensets, while Toshiba has fitted two SCiB lithium titanate oxide traction batteries rated at 62 kWh. TRE says that the diesel engines use neither urea additives nor particulate filters, but will be compliant with EU Stage V emissions regulations coming into effect from 2023.

The powerpacks use a modular design which means that one could be replaced by another battery pack or ‘maybe fuel cells further in the future’. TRE says that simulations have suggested the batteries could last up to 10 years.

The demonstrator is also fitted with a pantograph for use with 15 kV 16·7 z or 25 kV 50 Hz overhead electrification, which will be offered as an option for future contracts. Krey explained that the loco is the first German centre cab design with a pantograph to comply with TSI regulations.

The T-HDB 800 has a maximum power output at rail of 750 kW and a maximum speed of 100 km/h. It is aimed at heavy shunting and light trip freight applications.

Partners in the development project include Windhoff (power module assembly) and Knorr-Bremse (brakes), while Hitachi has supplied an ETCS onboard unit.

Final design of the locomotives for DB Cargo is still ongoing, with Krey suggesting that final assembly work could be undertaken at DB’s own workshops in Rostock.